Allied force have engaged our line at various points. Gradual pressure to the North of Caen has meant that our line now lies on the formidable defences on the Northern suburbs of the city. They have, however, been stopped cold due to the massive support of the artillery units on the other side of the Orne and the mobile artillery of the 21st Panzer Division shuttling around Caen to keep the allied air forces guessing where the next deployment would be. On the other side of the theatre Allied para units have been stuck fast in the bocage so characteristic of Normandy. The support given by the heavy weapons platoons has been invaluable. Unfortunately the US 29th Division has been exerting great pressure on the area of Isigny sur Mer. There is a great open flank behind this position and AOK is demanding reinforcements for this area. 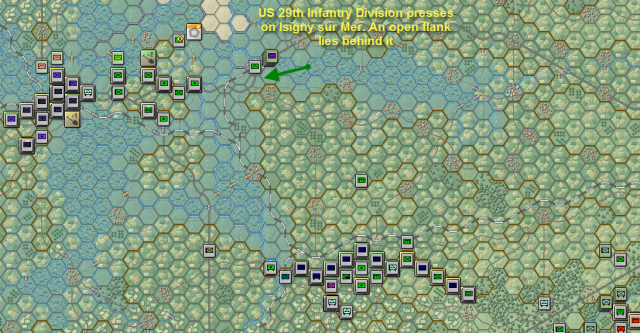 Open flank behing Isigny sur Mer. Elements of FJR 5 can be seen racing up the highway 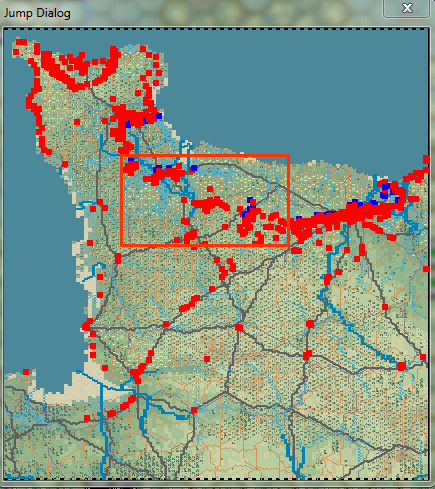 Match corresponding to the Barclay’s Premier League. After last week’s 1-6 defeat to City, UNited needed to bounce back and that they did even though it was in a rather cagey and unconvincing fashion. United’s goal was scored by Chicharito Hernandez with a toe poke from six yards between both of Everton’s centre halves. Everton must be given great credit for taking the game to United and even having us against the ropes a few times. David De Gea was once again a busy man but the man mountain that is Nemanja Vidic hit top form in a typically robust performance. Johnny Evans once again did his best impersonation of a floundering fish while Tom Cleverley was once again injured after going over his own ankle. Poor performance but three more points.

Allied naval forces have carried out a massive redeployment of ASW resources in response to the enemy’s shift in strategy in his employment of submarines. This has reaped immediate reward with the confirmed sinking of a submarine in the shipping lanes between Brisbane and the Santa Cruz Islands and the damaging of one off Bombay in the Indian Ocean. The Livermore Class Destroyer Meredith was leading a two transport task force to the Santa Cruz Islands when her sonar man reported a solid contact to starboard. Her klaxon immediately sounded for action stations and a message was sent to the second escorting destroyer, the Laffey, to assist in engaging a possible enemy submarine. Firm contact was soon established an a rain of depth charges began to fall on the enemy’s position. Underwater explosions caused high spouts of water that rained down on the crews of the destoryers and their perserverance was rewarded when a shark like prow broke the surface 1,000 yards from the Laffey. 5 inch batteries immediately engaged the clearly damaged submarine, though her brave Captain was able to loose one torpedo before she unlitmately sank never to resurface again.

Off Bombay a couple of motor launches tasked with ASW patrol duties was vectored to a sighting off a wake spotted by a Walrus aircrat suspected to have been created by a periscope. AE’s nifty patrol areas command is a great tool for ASW TF’s. If one sets reaction orders to the limit of a ships range at full speed there is a chance that the patrol will react to any sighting of an enemy submarine. Such was the case off Bombay with the four ML’s under the command of Captain Ricketts. 12 depth charges were dropped after sonar made a definite contact with an enemy vessel. Though no confirmed sinking could be made a certain amount of debris and oil floated to the surface so Ricketts entered ‘Enemy submarine engaged and damaged in approaches to Bombay’ into the Ship’s Log.

In the Solomons and intrepid raid by a group of USN Destroyers sunk a float plane support vessel and also exposed a hole in the enemy’s search plane patrol areas. Recon of Munda by F5-A Lightnings had spotted a large auxiliary vessel in port that had been tending 12 float planes in the area. Submarines patrolling the area of the Southern Solomons had repeatedly made reports of sightings and attacks by enemy float planes. Plans were made for a five destroyer flotilla under LCDR Frost flying his flag in the Bristol Class Caldwell to carry out a high speed night sweep of Munda. The plan called for a two day approach with the high speed run being started just off Rennell Island. Frost led his ships in quickly and met no opposition and indeed a large AV vessel was soon spotted by the radar on the destroyers. Open Fire was given at 02:34 with the first salvoes getting direct hits on the enemy vessel and setting it ablaze. But as in other engagements with the IJN the bravery of Japanese sailors cannot be called into questions as she returned fire with her batteries scoring telling and damaging hits on the Meade and Barton. Yet the superior firepower of the USN squadron soon began to tell and one by one the enemy’s guns fell silent and the ship was seen to sink at 02:56. Frost ordered the retreat soon after and by daybreak the least damaged vessels were clearing Lunga. However the air search radar began to pick up contacts bearing in from the North and soon enough two wave of G4M1 and G3M2 bombers dropped several sticks of bombs from around 7,000 feet scoring no hits. AAA fire from the destroyers damaged several enemy planes and one was seen flying back gushing very black smoke from its port engine. Frost ordered both the Meade and the Barton to detach from the main task force as they could not maintain top speed. By dawn on the 24th December Forst had made Lunganville while the Barton was heading to Brisbane and the Meade had come under the protective umbrella of our fighters based in the Santa Cruz Islands.

The AV Kiyokawa Maru starts to burn after being hit by the first salvo of 5 inch shells.

The next pages of relevance in the Wehrpass is usually page 12 which details the units the soldier spent his career with. It is largely the information on Page 12 that makes the Wehrpass collectable or not! As we can see from the scan Hans spent his war with Werkstatt Zug 550 and then 566. The Werkstatt Zug was essentially the mobile repair unit of the parent division. Hans’ skills as an auto mechanic in civilian life would have stood him in good stead in his war time service. More detail about the Werkstatt Zug can be found in this article from Lone Sentry. No doubt his services as a driver would have also been employed. Likewise it also explains the award of the War Merit Cross with Swords Second Class. It was a lesser award than say the Iron Cross Second Class but recipients must have been in an area that could have come under direct enemy fire or interdiction to able to qualify for the award. The 16th Infanterie (Mot) Division has a busy war time career and thus Hans would have no doubt been close to action on more than one occasion. 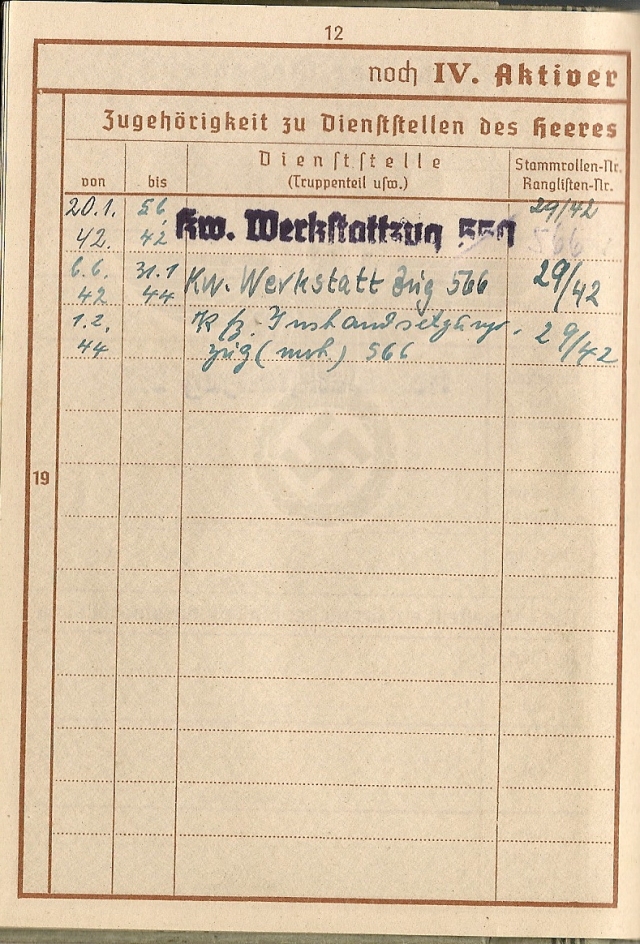 Pages 22 and 23 contain the information about any promotions or awards the soldier received or earned. In Hans’ case page 23 records his two aforementioned awards and their awardng units. Once again we see the stamp with FPN 41944 and the signature of an Oberleutnant (1st LT) authorising the award. His Ostmedaille however seems to have been awarded when he was serving with KW-Trop 666, a unit used for special purposes hence the z.b.v abbreviation you can see in the scan. His promotions record his service as first a driver, then a Gefreiter and then an OberGefreiter. Promotions in the German Army were usually back dated to the first day of any given month in order to facilitate pay.

Read this article in the Yahoo news feed. Might be of interest to those interest in the Pacfic Theatre of War.

A dangerous quiet has setlled over the Pacific. Both sides are sitting back, refitting and redploying. Radio Intell Services are awash with rumours of a mighty Japanese operation in the making. Lost of call references of ships in the Truk area, but also messages, lots of messages requesting fuel (Herb told me in an email something BIG was in the offing but a critical fuel situation might still be see it cancelled).

The one enemy arm still with enough fuel and ammo is his submarines. Quiet for months on end they havce suddenly erupted on Allied merchant shipping across the theatre. The following is taken from the games comabt report. For those of you who do not know AE, each game turn produces a set of reports that neatly catalouge all the combat and intell reports and events for one to peruse at leisure. Ofcourse these are subject to FOW.

On a happier note Burma Corps were lauded as heroes as they trickled over the Indian Border their ordeal finally at an end.