Two 3 gun batteries of 1./PJ.200 on overwatch on roads leading from Gold and Juno Beach to Caen.

HPS Panzer Campaigns has the ability to zoom in to a very small scale and we get to see the terrain in 3D mode giving us an excellent view of the lie of the land. Terrain is crucial in battle and so it also is in pixellated war. In the screenie we see two 3 gun batteries of 88mm DP guns from PanzerJaeger Battalion 200, 21st Panzer Division. They stand on a hill of 50m elevation and grants them a 4km observation area. The hill commands several routes from the British and Canadian beaches into Caen. The viewed distance will allow us some early warning when the push on Caen comes and gives the 88m an excellent field of fire on roads the British armour is sure to use. Furthermore the hill is classified as ‘field’ terrain which gives a +25% bonus to defence and it also has a trench dug in it adding a further 20% bonus to defence.

Daylight brings back the Allied airplanes that have hammered troops movements along the major highways. Those traveling in more secluded and wooded areas have been spared the worst. Overnight movements were able to be carried out with no interdiction at all. Allied air supremacy is total. Yet the Luftwaffe takes to the skies but not to perform any combat missions or to conduct fighter sweeps to protect their land bound comrades. Instead 5 Arado 240 reconnaissance aircraft fly over the Utah Beach Area in an attempt to gather information about enemy dispositions. The sortie takes place at first light and no enemy fighters intercept the flight. 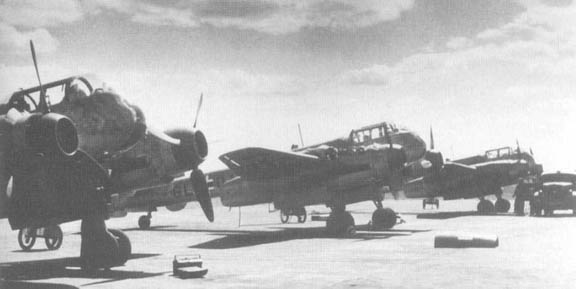 Arado's 240 ready themselves in rear airfields prior to thier mission over the Allied Beach Head.

Further to the West American units from Utah Beach have solidly linked with the airborne soldiers dropped 24 hours earlier. They have a wide expanded beach head but the paras are starting to come up against good defensive positions in solid defensive ground. 91st Luftlande Divsion and 709th Infanterie Division start to make the German left flank on the Invasion Front!

Mid Ocean intercepts are not the sole domain of the Allied Navies!

Listening Station 192 stationed on a cliif near the city of Perth began to pick up several distress signals originating from Convoy CTP-XN13, an outgoing convoy that had just unloaded a large cargo of replacment engine and frames of Beaufort VIII torpedo bombers at Perth. At first the soldiers manning the radio could not believe what they were hearing. There had been absolutely nothing of note in the Perth area since the brief Japanese occupation and subsequent withdrawal in April. Two submarines had been sighted in the 8 months since but that was it. All of a sudden the airwaves were full of mayday signals and request for immediate aid and assistance being broadcast in the open!

As it turned out XN13 had been intercepted by a lone enemy light cruiser, post war study of Japanese TROM’s identified the ship as the light cruiser Kashima of the Natori class. She had sailed deep into the Indian Ocean and had infiltrated the shipping lanes between Cape Town and the Western Australian sea board. 4th December, almost on the first anniversary of the outbreak of hostilities against Japan, was the day that the merchant mariners of XN13 met the fire and fury of an Imperial Japanese capital ship. 5 merchants were heavily damaged as they travelled unescorted in what the Allied commanders regarded as their backyard and safe waters, not that any spare escorts existed! At the time it sent waves of some panic across Australian Commands. The day’s action saw the loss of two 5375 ton Dominion M Cargo Class freighters, the M/V Aloe and the M/V Clan Macgillivary

Was this cruiser a scout for a larger carrier force behind it? Only last week radio intell had identified a large number of vessels steaming to the south of Java. Or was it a lone raider trying tis luck safe in the knowledge that the allies had one fully fit carrier in the Indian Ocean? Time would tell

The Wolf Among the Sheep!