One year to the day that Pearl Harbour was attacked by the forces of the Empire of Japan, US forces were landing on the Mandate Islands that the League of Nations had given to Japan to administer. A thrice thwarted operation was finally given the go ahead on the evening of the 6th December. As such it was a poignant moment when, when simultaneously service were being held in Oahu, guns from battleships that had been there at Pearl Harbour were thundering just offshore at Maloelap in the Marshall Islands. They augured an invasion force that was led in by the new South Dakota Class battleships. Two Marine Regiments were to be landed ashore and supported by an artillery regiment and a USMC armoured battalion were to take the island from the Japanese.

Oklahoma leads the bombardment with the opening salvo

Following behind the battle wagons four different landing forces trailed their attendant destroyer and minesweeper screens. No defensive minefields had been detected and the destroyers closed in to the shore line as smaller craft ferried the first wave of the 1st Marine Regiment in. They engaged the shore and beach defences in order to suppress them and give an extra protection to the flimsy landing boats. Return fire was initially heavy but its rate of fire gradually dropped as the assault proceeded.

By mid afternoon enough assault units had been landed to carry out an assault on the first lines of defence. Coconut tree log bunkers and concrete emplacements with heavy machine guns and light anti tank guns raked the marines with fire as heavier calibre ordinance fired from further inland. The first line was quickly overrun but the tired attackers decided to hunker down at twilight on the border of the major airstrip on the island. The 1st Marines took the left flank while the 8th Regiment made up the right flank. The 1st USMC Tank Battalion suffered some disruption on landing and was slow to get itself organised to support the days attacks. Nonetheless individual tank commanders showed great initiative and moved up to engage the heavier bunkers as the marines assaulted. The next day was going to be crucial as it was hoped that the supplies onboard could be left on the beach under the cover of darkness. Oh and the intervention of the IJN ws to be expected.

Operation Jump has been given the go ahead by the Joints Chiefs of Staff, 7th December 1942, a poignant date for all Americans. 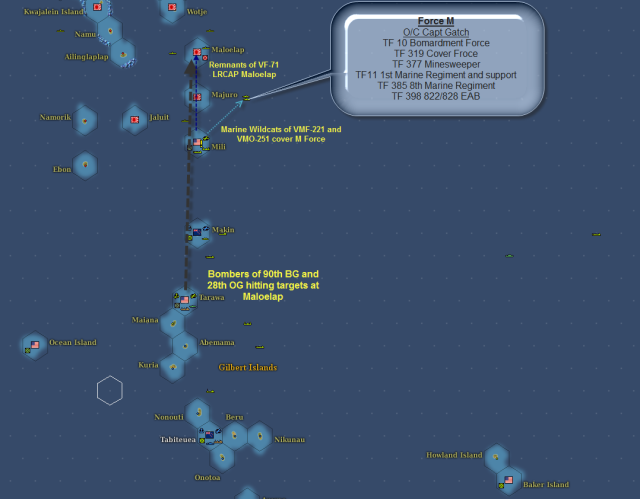 Indulged in one of my other loves this noontime, football (the proper type). As an avid Manchester United fan today’s game vs the Scousers is always a highlight of the football calender. SAF’s intial line up didnt fill me with confidence and neither did Ryan Giggs’s impersonation of Sir Robin in the defensive wall when Gerard scored. Yet the man popped up again to head in our equalizer. Arise Sir Javier ‘Chicharito’ Hernandez. Gem of a player and we Reds love him. Kudos to David De Gea in goal today with several good interventions especially one good one on one save against Luis Suarez. Come on the Reds!!!!