IJN cruisers hit Tarawa after messing with a PT squadron that had been stationed there. The PTs had little effect and 5 of them were ultimately sunk in a vain attempt to intercept the bombarding ships. Their shells however had little effect on the airfield despite getting three planes on the ground. All bases are on full alert and we are looking at striking back as and when the opportunity allows.

The weather was closing in fast however and this may have curtailed enemy carrier operations. Contact has been lost with SS Scamp. Its last report stated that it had been hit by a bomb and was seeking refuge in deep water. The worst is feared after the last two report times were not met by the sub. Heavy contacts as well with the destroyer screens around the enemy carriers and capital ships. Luck is surely to shine on at least one or two submarine captains as they duck and dive to find a chink in the Japanese armour!

I am posting the December totals for submarine sinkings and damaged ships from the AE Submarine Reporter tool. 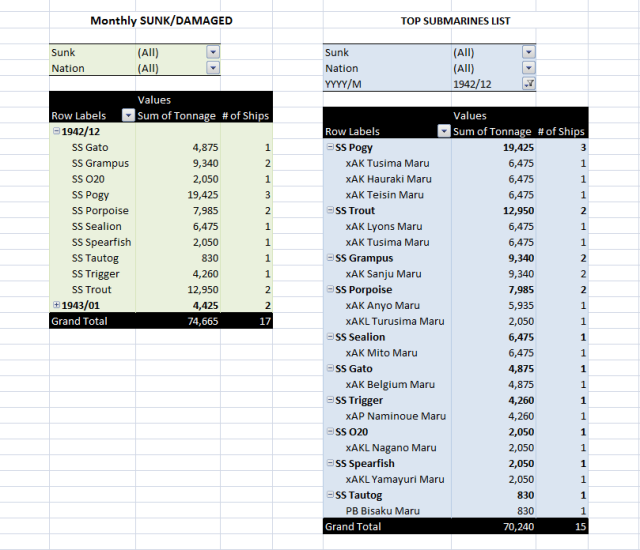 Day two of the Japanese attack on the American enclaves in the Marshalls. Japanese carrier planes unleashed their fury on the airfield at Nauru Island. 70 odd Zeroes escorted over 100 B5N2s carrying bombs that were dropped all over the airfield and its installations. Supply dumps were hit and the small fuel cache on Nauru was destroyed. A damaged Libeartor and one Catalina patrol plane were also destroyed on the ground. What few planes that took off were able to discern that the Japanese main body had sailed SSE during the night and thus missing the vectored submarines that were circling it like a shark around its prey.

Simultaneously two small minesweepers were sunk off Ocean Island 180 miles to the East. A swarm of D3A’s mercilessly bombed the almost defenceless targets and sunk them in a veritable shower of bombs and ordinance. Japanese ships were sure to now turn their direction on Tarawa and its surrounding island bases.

Got my pre orders for both XBox and PC yesterday. Couldnt install PC yet becuase Steam claimed the game wasnt released yet, though it already is 11-11-11 on the other side of the globe today so I will try to reinstall later today. I must say that my first impression is amazing. Had a few hours on the XBox last night and visually it is a MASSIVE improvement on Oblivion. Grpahically the game adds a gruffer feel, more atune with its new location and terrain. I love the new weather and the fact that mods like Living Economy from Oblivion have been taken on board. The combat system is now something to enjoy rather than the swing-hit feel of Oblivion. I had a walk around the inital game area, went into a Barrow, thoroughly enjoyed the immersive atmosphere and I am counting down the hours to 15:30 when work is over and I can return to Skyrim. I thank Greys Anatomy for keeping the wife off my back 😉 Hopefully Steam will let me install today because I bought this game for the PC as I strongly believe that the forte of the Elder Scrolls games is its community of modders that have given me endless hours of Morrowind and Oblivion. So by the Eight Divines Steam let me install the damn game.