Bedlam awaited Se’rith when she got back to Winterhold. Berlyna excused herself and headed straight to her chambers, she wanted to study a circlet they had found in Mzulft. Se’rith went on ahead to find the Archmage and tell him about Labyrinthian. She entered the Hall of Elements to find it in chaos. Savos and Mirabelle were trying to break open a green, swirling force field that blocked the entrance to the main chamber. Savos noticed her and shouted for help saying that Ancano and the blasted Thalmor were responsible for this. Se’rith started to launch her most powerful spells at the field to supplement the magics the two more powerful mages were launching at it. 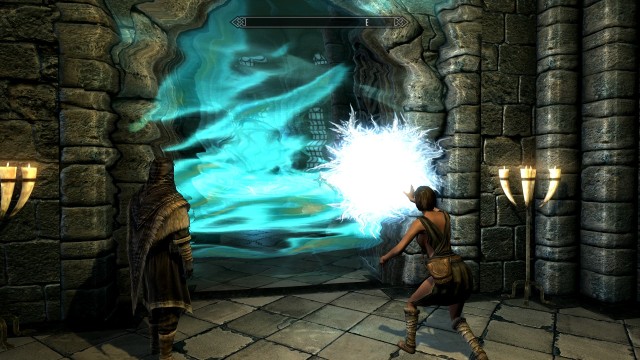 Tough as it was, it had to give way under the relentless pressure applied. It was rent apart and forced out of existence. All three ran into the chamber to find Ancano casting some foul magic at the Eye of Magnus. Eerie looking lights swirled around it and it had taken on a more sinister look. Savos ran towards the Altmer and leashed a spell of massive force, Se’rith could feel its building power. A massive explosion followed, the Dunmer was thrown through the air and cracked her head against one of the stone columns. The world went black… 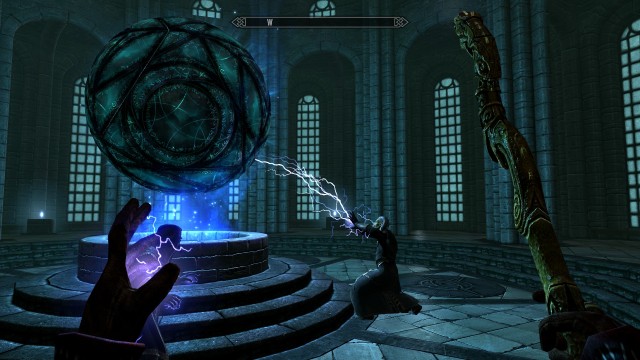 She came back to the sound of Mirabelle’s voice weakly calling her. The side of Se’riths head that had hit the column was caked with dried blood, her red hair a matted mess of coagulated blood. She weakly stood up, need the support of her staff to do so. Mirabelle was also hurt, badly by the looks of it. She was sat up against another column, her face bruised, and her robes torn and bloody. She kept whispering Se’rith’s name and calling for Savos. Of the Arch Mage and the bastard Thalmor there was no sign. Se’rith stumbled over to her and Mirabelle grasped her wrist weakly. ‘Go into Winterhold, help the people, creatures…’ her strength gave out and she passed out. Se’rith ambled to the door draining a health potion in the process. Outside in the courtyard the Masters were gathered and she caught the last snippet of the conversation they were having, a snippet that made her Dunmer blood run cold. Savos was dead!

Tolfdir saw her and ran towards her. Her channelled more healing energy into her battered body and she could feel the strength return to her limbs. From beyond the walls she could her the screams coming from Winterhold. She brushed past her mentor and charged out of the College. To her great surprise Faralda and Sergianus charged with her. Winterhold was being attacked by what can only be described as orbs of raw magical energy. The three College members stood atop the entrance ramp blasting away with fire, frost and electricity. Sensing magical discharges the orbs turned to them as if they were bloodhounds catching the scent of the Hunt in the air. They sped towards them. Se’rith was glad to note that one creature that took a lightning bolt exploded out of existence leaving behind a small glowing gem. A second creature however launched three missiles of pure energy at her. She was thrown back and her robes were singed. Her chest felt as if an Atronach had just stomped on it! Faralda came to her rescue with a volley of fire bolts that similarly destroyed the creature. With a little difficulty Se’rith stood and downed her last potion. Still weak she helped her colleagues in taking Winterhold back! 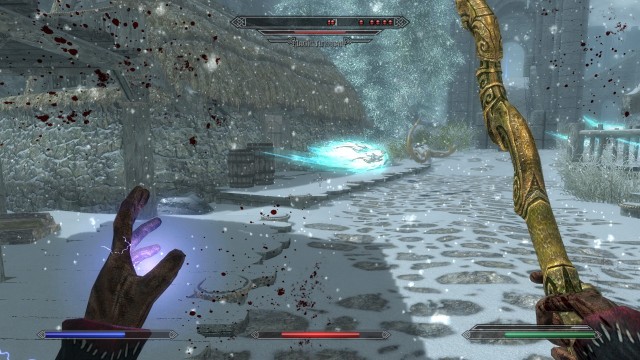 They limped back to the College to find Mirabelle lying on a bed in the Hall of Countenance. When she saw Se’rith she inquired as to Winterhold and its people. Reassured all was well she drew the dark elf close. She wanted to know what she had learnt at Mzulft and if she’d learnt anything about the Staff of Magnus. At Se’rith’s mention of Labyrinthian her eyes went wide. She told her that Savos had only yesterday been talking about the place and had given Mirabelle two artefacts pertaining about the place. Did the Arch Mage have a premonition? Whatever the case Mirabelle told Se’rith that she must make to  Labyrinthian with all haste. The fate of the College and maybe Skyrim itself lay inside it and Se’rith was the only person armed with the knowledge to do anything about it. This time however she would be going alone, Brelyna had been ordered, along with all the other students and Masters, to stay behind and defend the College and Winterhold. Se’rith was alone. What would she find inside Labyrinthian?

Match corresponding to the Premier League and played at Old Trafford.

Manchester City’s result at St James’s Park earlier in the day had pretty much taken the sting out of this one. United did what they had to, win. yet City should be champions by this time next week. It wasn’t lost last Monday at the Etihad rather on New Year’s Eve against Blackburn, losing at the DW Stadium, letting a two goal lead slip twice against Everton. The list is endless of idiotic results that have meant that after 16 point swing United handed City the initiative. Once can clutch at straws in that QPR are still very much alive but a team that has won at home with regularity in the past weeks has also lost with the same regularity away. Nothing is yet decided but as Sir Alex said before kick off, they have two hands on the trophy. The match was a bit anti climatic for the reasons given. Scholes and Young got the goals and De Gea prevented City’s goal difference advantage getting larger. The curtain comes down on Old Trafford for a season that could have seen the trophy being presented on that hallowed turf today but alas there are many problems with this squad and something Fergie will have to be done. Heres to a last day miracle!

Tom Cleverley on for Paul Scholes

Dimitar Berbatov on for Wayne Rooeny 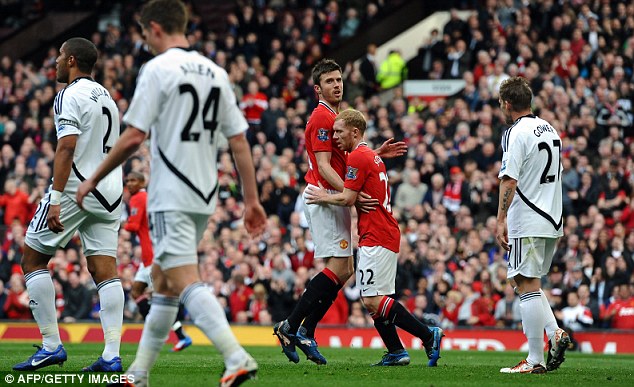 On a raised platform above the orb Se’rith and Brelyna found three aqua marine gems set into some sort of Dwemer constructed plinth. Pushing one, they were spring mounted, it clicked and one of the three concentric, circular rings set in the ceiling above the orb rotated. Se’rith deduced that the other gems must control the remaining two rings. Paratus shouted from below that his research had led him to believe that the Dwemer control crystals were highly susceptible to extreme changes in temperature. This gave the mage an idea. She called force her Flames spell and launched it directly at the crystal, now set in the dias at the apex of the orb. The light reflecting from its faceted surface changed angle as the crystal reacted to the heat. Three beams of light now projected from it hitting the centre of each of the concentric rings. 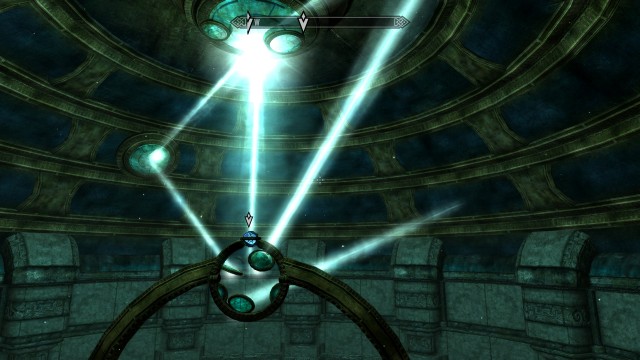 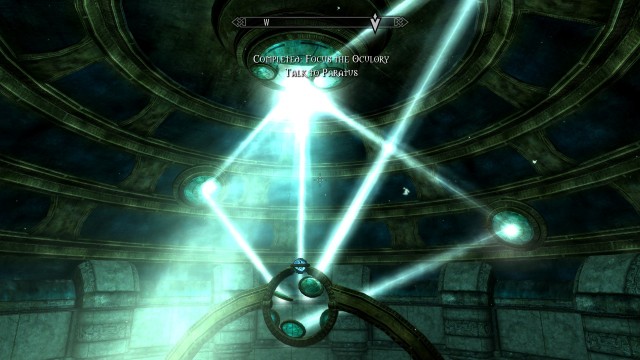 Paratus yelled with triumph as he studied something that had been projected onto the wall. His joy was suddenly tempered with fury as he turned on Se’rith in a very aggressive manner and tone. He was rambling inconclusively about something the College had in its possession, something of great power that was running interference. Se’rith was beginning to think that Paratus must have lost his mind, being cooped up inside the ruin for so long. Yet she reconsidered when she saw what was being projected on the wall. A map of the whole of Tamriel, it seemed to have been stencilled in starlight! High Hrothgar was clearly highlighted and saw was the isle in Cyrodiil that housed the Imperial City. Two bright dots dominated Skyrim, one where the College is located and the other one near the city of Whiterun. Se’rith looked at Paratus for an explanation. 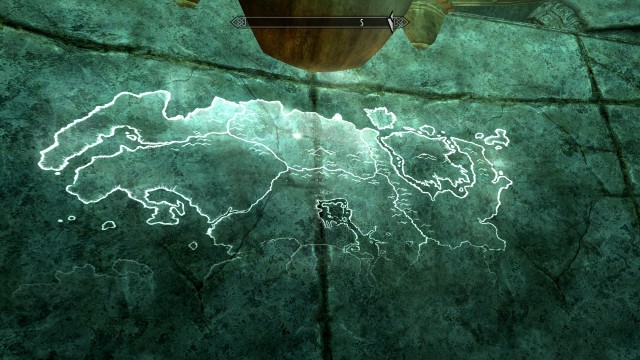 The Synod member explained that this Oculary, similarly to the Orrery at the Arcane University in the Imperial City, is used to locate sources of great magical power. Looking at Skyrim the College owned one such artefact, it had to be the Eye thought Se’rith, and the other one was in a place that Paratus called Labyrinthian. Se’rith wondered if this was where the Staff of Magnus was located. Paratus once again became aggressive in his accusations that the College was interfering with Synod work. He was shouting and gesticulating with his arms, so much that Se’rith called force her ward spell thinking the Imperial was going to launch an attack. He suddenly stopped and said in a calm voice that he would be reporting back to the Synod and telling them the College ha something powerful, very powerful in their grasp. Se’rith did not like the tone and watched warily as he left the chamber. Both Dunmer then explored the rest of the chamber, Se’rith picking up some books Urag might be interested in. They then made their way back to the surface. 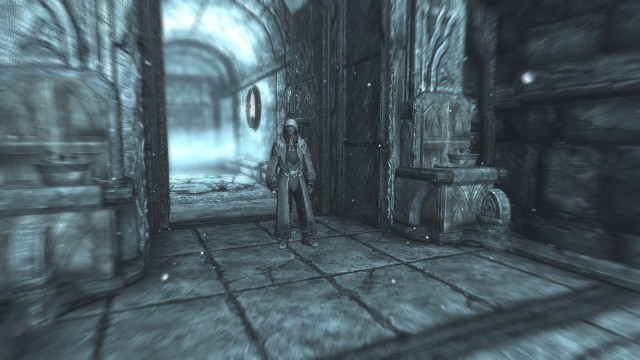 As was nearing the entrance to Mzulft, Se’rith suddenly became dizzy and her vision blurred. As her vision cleared there stood a Psijjic Monk. He congratulated Se’rith on her progress but warned her to get back to the College immediately. Events were in motion that only she could stop and the College was in dire danger. The Psijic’s had set her on the right path and she was capable of bringing things to a successful end. As the monk winked out of existence, his words of stressing the importance of getting back to the College wafted through the ether. The Dunmer emerged into bright sunlight, the warmth a welcome sensation on limbs so long underground. They mad the short climb up to Primby to rest and eat before the walk back to Winterhold. 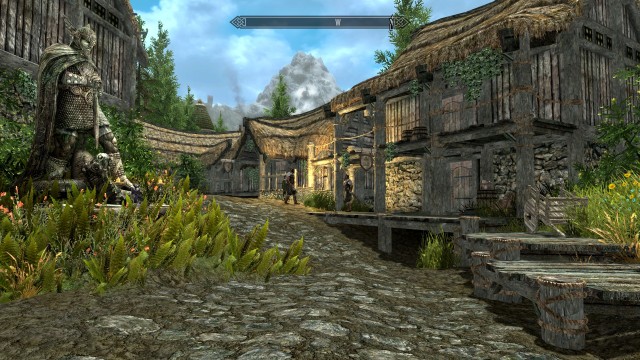 OT-I have this morning downloaded and installed the Ultra Realistic World Lighting mod by Marco. It is an immense graphical improvement and my machine only took a very small hit to performance. I recommend it!